The Tauranga Motorcycle Club was formed in 1949 to attract the increasing number of young motorcycle enthusiasts away from their “blasts” along Joyce Rd into organised and legitimate activities.

The subscription was fixed at 10 shillings and events were organised regularly with considerable success. One of the early events required buses to take spectators to Papamoa to see beach and dune scrambles on tracks that had been cut through the lupins that morning.

Reliability trials took riders and their pillions as far a field as Waitomo and Auckalnd. You had to know your bike to travel the timed sections (sevens miles at 20mph from Pyes Pa through the gorge to the Oropi quarry) without the aid of a speedo. Too fast lost you points but so did too slow. 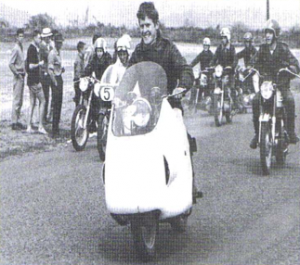 Farms in the area hosted track events and miniature TTs as well as obstacle bending and slow races and push bike races for boys. Some races were sweepstakes. The winner received 60 percent of the entry fees for the race, 30 percent went to the second rider and 10 percent to the third.

Through the 1950s and into the mid-60s one bike and one set of tyres did everything. You could see a guy riding his bike to work during the week and then out on the tracks on the weekend. On the sand dunes, the road trials, the scrambles and grass tracks at Hastings’ paddock, the trial riding though streams and mud at Oropi, the hill climbs at Mcleod’s farm or the road circuit races, club members just attached a racing number and put on a cap or helmet to suit the event and they were off. 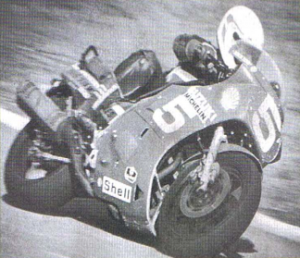 Tauranga’s Robbie Dean in action in 1987